It has been a while since we shared any updates with you officers. We have dozens of assignments to entrust you in the future, so fear not!

You may or may not have heard the news, but as you can see from the title, Mayhem Brawler is getting a physical edition!

Players might have noticed that we stealthily released an update for Mayhem Brawler a couple of weeks ago, fixing some minor bugs and making slight adjustments. However, the actual reason behind the update was that it was a necessity for the physical version. We surely didn’t want to ruin the surprise for you guys.

With the help of our community members and the team’s tireless efforts, we believe the Mayhem Brawler is perfected and achieved the spot where we dreamed about during its development. Receiving positive reviews from all other platforms brought utter joy to our crew with the latest updates.

And as a thank you gift for our officers, we wanted to release a physical version of the game! Even before the release, we have seen countless comments on our social media accounts from collectors asking if a physical version will ever become a reality. This demand was great news for the company!

The bad news was that we didn’t have the slightest idea about launching a title with physical copies. Developing our games for all major platforms in digital, the team had no experience with a matter like this. Not to mention, it can be challenging to handle the process financially as an independent company. After detailed research, we came across a video game publishing company called the Red Art Games. A hardworking team with the catch-phrase, giving physical life to digital games.

Red Art Games offer physical versions of video games only available on digital in limited edition. They give life to Sony PlayStation 4-5, Microsoft Xbox, and Nintendo Switch’s retro-oriented digital games for collectors around the globe. After communicating and arranging a couple of meetings with our friends at Red Art Games, we decided to work as partners and entrusted Mayhem Brawler to their seasoned hands. 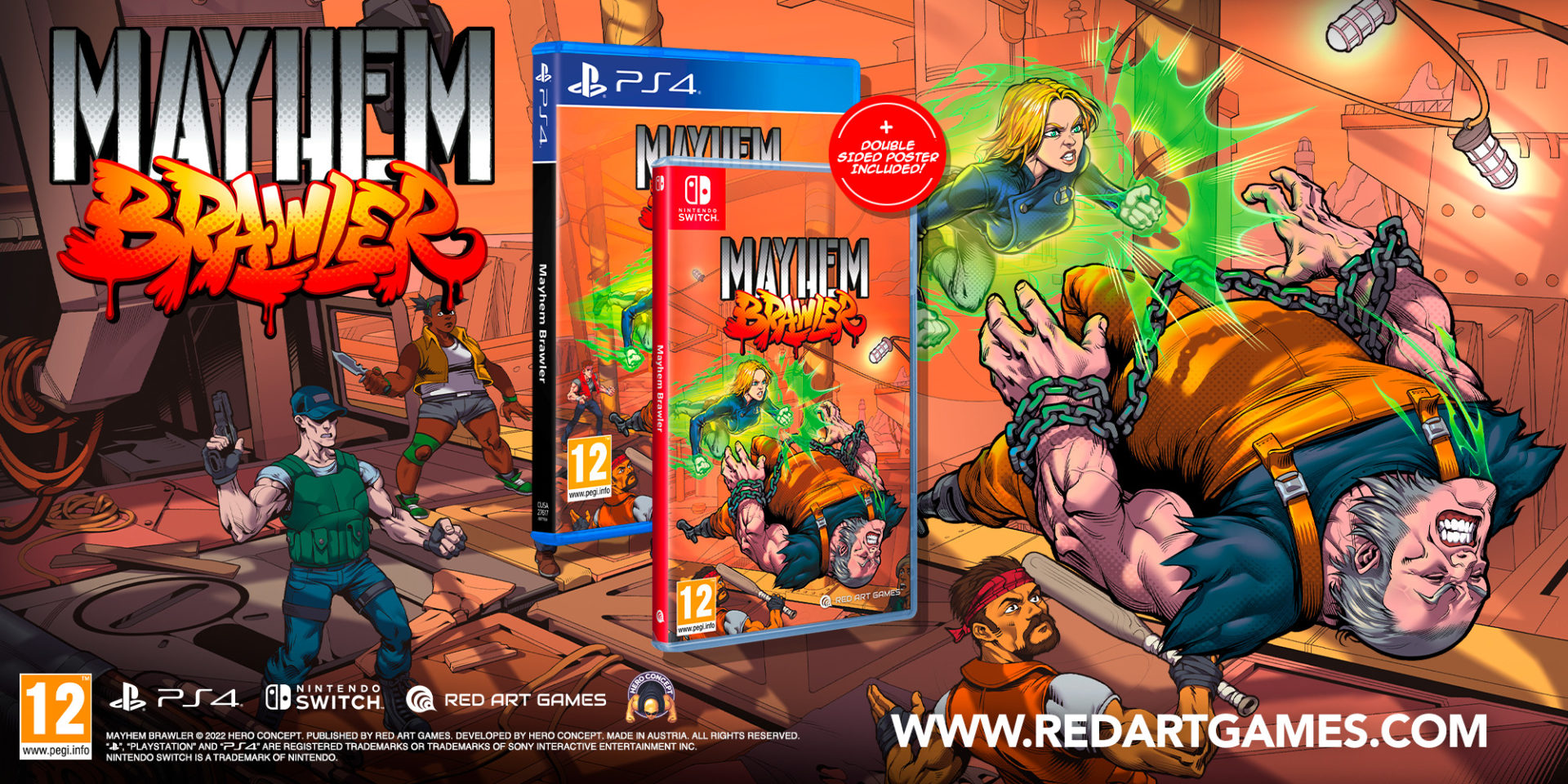 It took a couple of weeks, but in the end, our diligent friends completed the assignment and started the preparations for the production of physical copies. The physical version contains all the Major updates released so far, including Air Supremacy and Wolfpack, along with a double-sided poster inside as a present. Sweet!

Pre-orders are starting today via redartgames.com, and as I previously mentioned, physical copies will be available in limited quantities. There will be 2900 copies for the Nintendo Switch and 999 copies for the PlayStation 4 available for collectors. The distribution of the copies will begin on June 24. The early bird catches the worm!

It was an exciting journey for the team, and we cannot thank our cheerful friends at Red Art Games enough for collaborating with us. They worked tirelessly, listening to all of our requests and being cooperative whenever needed, the Red Art team became a dependable business friend. Thank you so much, Red Art Games!

We hope those who asked for a physical copy since the beginning can acquire Mayhem Brawler and display it on their shelves. Don’t be shy to show it to us as soon as you get your hands on the copies! You can follow our social media accounts to get notified about the latest news. Join our Discord channel and become a part of our growing community. Till next time!