How is it going, brawlers? Today we’ll dive into the animations and pipeline process of Mayhem Brawler II: Best of Both Worlds.

They call me Emre, I am an animator at Hero Concept since Mayhem Brawler was halfway through. I have always been a sucker for traditional animation. Both modern and retro-themed fighting games such as MVC2, SF3, and, Skullgirls became a massive source of inspiration for me immediately after I discovered the fighting genre. The inspiration I took from fighting game artworks and animations led me to work for the Mayhem Brawler series.

What Did We Need For This Game, Animations?

We designed our characters based on how we wanted to animate them. So, what kind of animations would we need? The answer was hidden in the pace we desired for the game. We intend MB2 to be fast-paced, flashy, and combo-heavy. Therefore, we animate them accordingly and, the designs must meet this demand.

Another very crucial thing we need to consider is our budget. Every detail we add to our characters’ designs results in a new drawn element on every frame of the character. the details we add to a character must be worth it. They must add some value to our characters’ stories or tell something about their personalities.

The size of the characters on the game screen is also very important. For example, the wrinkles we draw to their finger joints will be almost invisible in-game. Therefore, there is no point in spending time and effort on such small details.

Time For The Animations

Although there are many reasons to simplify our designs, we are also motivated to add details. We aim for our characters to shine when there is a hit stop. Fast movements that happen in just a few frames can be challenging to see for players. So when a hero lands a successful hit, they enter the hitstun phase with a clear pose. These hitstun poses give clues to the player about what just happened. Such details provide characters to have more charming looks while they’re posing – just like on a splash page from a comic book.

In this project, we had the opportunity to benefit from techniques that we had not used before in our animations, thanks to the pace we had preferred for the gameplay and our new design approach. While we increased the sense of hit with more exaggerated overshoots, we strengthened the sense of speed in movements thanks to smears. I learned a lot of new things myself during this process.

Aside from exaggerated and more animated animations than should be, we may also need subtle animations.

Are your characters moving too fast and their limbs suddenly shifting? Does the character hit, break or smash? Or does it look like it is scratching someone? 😉 The character’s body movements may not be enough to answer these questions. Even if it could, why not make them stronger?

What did she do exactly?

Maybe when we scratch someone in real life, jagged lines don’t appear right after our nails. If the animations we make on the bodies of the characters describe what they are doing, the visual effects describe how they will feel. It also helps us to describe the path followed by the displaced objects.

There are many more where they come from.
Some effects can even be the attack by itself, but I prefer to leave this issue as a surprise for you…

As an animation progresses through the Pipeline, the effort required increases with each stage it undergoes. In the meantime, if we want to make a change to the movement, we often have to go back to the first stage and go all the way from the beginning. So the sooner we spot mistakes, the better. After all, modifying a finished and painted animation is much more expensive than messing around with a few sketches. Unfortunately, it happened to us! 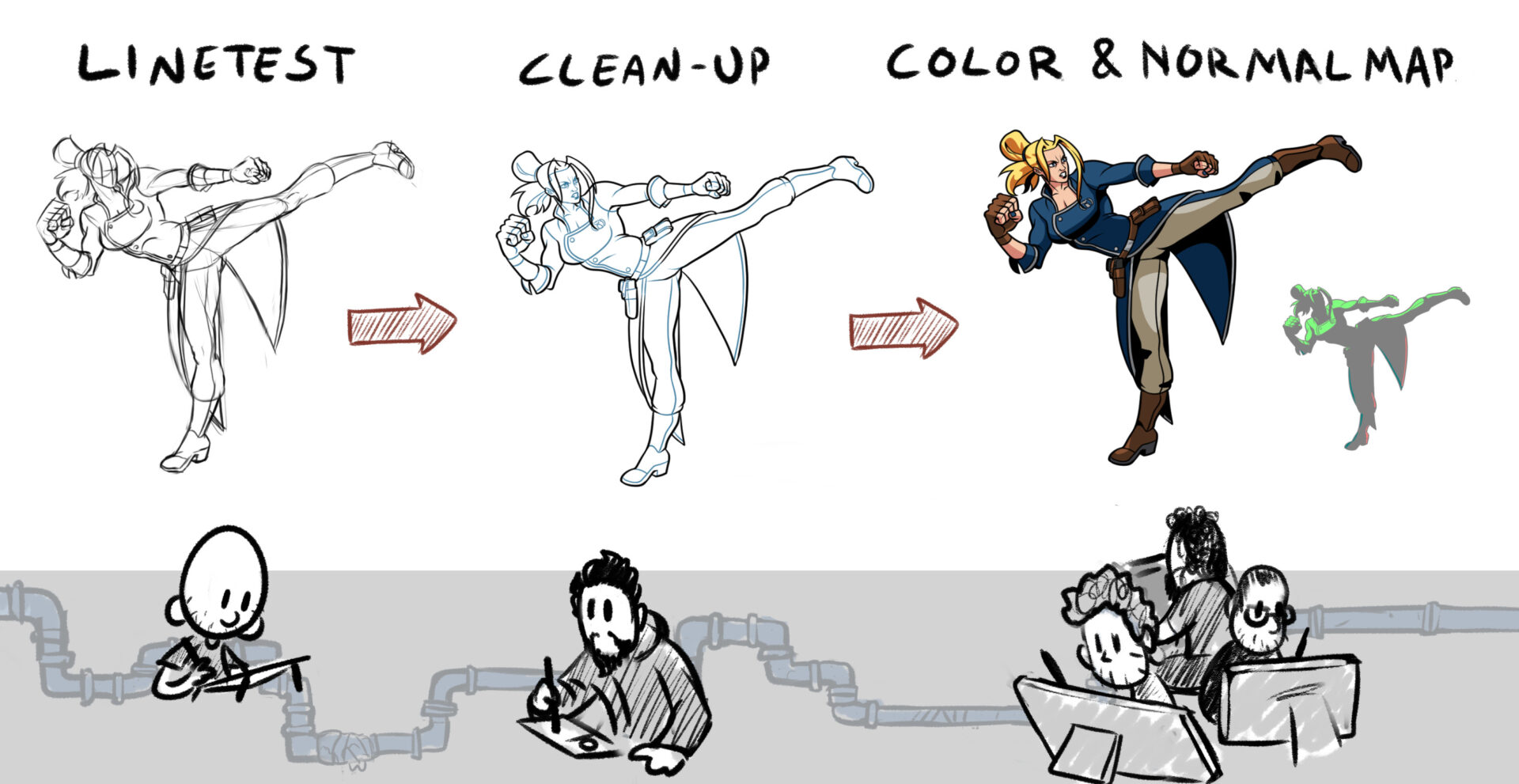 The communication of the team with each other is also very important within the pipeline process. When we produce recycled frames, exceptional drawings, and sometimes out-of-format assets in our animations, it is necessary to explain the situation to our teammates responsible for clean-up and color. Likewise, it is very important for them to contact the previous person, who played a role in the process, without hesitation when they encounter any problem that confuses them.

We Got Them Moving, Then?

In this part of the diary, we talked about how we designed the characters and what kind of choices we made when we got them moving. After we’re done with the animation, the next thing is to clean the drawn frames, paint them and convert them to assets and transfer them to the game engine. We will discuss these issues in detail in the following sections. Stay tuned for more of our diaries.

written by Emronius and his under-eye bags